Erigeron philadelphicus, aka Daisy fleabane, Philadelphia fleabane, or common fleabane, is native to North America and is commonly found along roadsides, in fields, and in open forest like Dunn Woods. It is a member of the aster family, is easy to spot as it is has multiple flower heads, and it is often a foot to two feet tall with colorful pink-white flowers with hundreds of florets surrounding a bright yellow center. The name comes from the folk belief that the dried plant would repel fleas.

Dunn Woods has a large colony of Erythronium albidum, the White Trout Lily, which is rarer than its cousin the yellow trout lily, Erythronium americanum. The white lilies appeared just after April Fool’s day, and are still going strong on April 12. A few yellows have appeared, but the main body of them is still dormant. Both are spring ephemerals, and come out a bit later than the early birds like Harpinger of Spring, Cutleaf Toothwort, and Spring Beauty, all of which have been in bloom for a while. Today I found that the white version blooms fully before the yellow variety. A couple of yellows are out in some sunny spots, but the whole colony of white trout lilies is blooming now. Some folks use the term Fawn Lilies for either type, as it is the leaves that remind one of the mottled skin of brown trout, or a young fawn.

This colony is growing en masse on both sides the path highlighted here. They certainly seem to enjoy growing together in a homogenous swatch. Underground the elongated bulbs can be dug (not in Dunn Woods!) and cooked like any root vegetable, or dried and ground into flour. The bulbs are small compared to potatoes, but with with hundreds/square foot, they are an abundant forest crop.

The yellow version is sometimes called dogtooth violet, but this seems to me to be a poor name for it as it is not related to the violet family, even though it appears at the same time of year. But the violets last long into the summer, while the Erythroniums are true ephemerals and will stop blooming in a few weeks. So take a walk through the southeast quadrant of the woods, and you will see these beautiful spring ephemerals.

May Apple, Podophyllum peltatum, aka American Mandrake and Ground Lemon, is common in the woodlands of southern Indiana, and is well represented in Dunn Woods. Last week they were just starting to poke their heads up, but this week they have fully popped out their full leaves. May apples typically have one or two large leaves. The two leaf versions produce flowers and eventually (in June) a fruit. They grow in colonies from a single rhizome, or rootstock. As an alternate name (American Mandrake) suggests, the plants are toxic, containing podophyllotoxin, which is used topically to remove warts, and has shown some promise as an anti-cancer and anti-viral agent, but don’t try this at home!

They produce a smooth lemon sized fruit that is edible in small quantities when fully ripe (they turn from green to yellow when ready). Some folks have a bad reaction to them, but I found them delicious, they are sweet/sour, and have the consistency of grapes. But they are very are to find when ripe, it seem the mammals in the woods get to them just as they turn yellow, it is a bit like trying to find a ripe paw paw, the animals know where and when to pick, and don’t leave much for humans! The first spring wildflowers poked up their heads in Dunn Woods during the week of February 22. There are several bunches of snow drops, aka Galanthus, often the first wild flowers to appear this year. I will be finding salt and pepper (harbinger of spring, Erigenia bulbosa) in the deeper woods soon! Below is a link to Kay Yatskievych‘s Flower Finder for Indiana Spring Wildflowers, the single best resource I have found for indenitying Indiana’s emphemerals. Happy hunting! This spring I went to where I had found a hillside of wildflowers in Griffy Park, and my timing was perfect, they were in full bloom last week. I thought I had found thousands of Dutchman’s Breeches, but when I started looking at my pictures, something was wrong, there were two distinct types of flower, what was this. The answer was easily found in looking through the new Flower Finder for Indiana Spring Wildflowers just released by Kay Yatskievych of the Missouri Botanical Garden.

There were a couple of Dutchman’s Breeches, Dicentra cucullaria, in the mix, but the vast majority of plants were its cousin Squirrelcorn, Dicentra canadensis. As the latin name implies, they are a 2 part flower, but both the flower and the foliage are different several respects.

On Saturday, Jojo and I went for a bike ride east of Bloomington, and while hiking in the Yellowwood forest found the motherload of bluebells (Mertensia virginica). Two weeks before we had ridden to Woodall Road where we had found them last year, but no luck, and a lot of hill climbing resulted. But this cool clear spring day we encountered a side valley that eventually rises to Scarce o’ Fat ridge.

All along the forested valley floor the bluebells were only plants visible, with an occasional buckeye sprout rising above the carpet of blue flowers and magenta buds. There was a dry branch running through the middle, and we walked up it a few hundred yards and sat on a log to admire the etheric glow of the bluebells. Right next to us I discovered a rare plant which did not turn blue once it flowered. (The bluebell buds are magenta when they appear, then as the flowers grow out of the buds, they morph to the a vibrant deep blue.) The pink bluebell seemed to be pretty rare, of the tens of thousands of flowers in the valley we saw only 2 pinks, and they were close together.

I’ve heard from others that this has been a good year for bluebells, they certainly did like this spring. They are perennials, but also spread from seed that is not easily dispersed. This means that they take over whole areas of a forested flood plain; here they were even beginning to climb the hillside, not their normal habitat.

I was walking in Dunn Woods at lunch today and heard the unmistakable call of a Cooper’s hawk nearby. I looked at the nest they used last year, and sure enough I saw a tail hanging over the edge, then turn and disappear in the sticks that make up the nest. I walked to the top of the hill where I had seen a patch of trout lily (Erythronium americanum) leaves a couple day earlier. Sure enough, there were dozens of the the little yellow wildflowers, sharing the forest floor with the Spring Beauty (Claytonia virginica) that is widely dispersed in Dunn Woods.

On a bike trip today, I found the first wildflowers of my season, a healthy group of trillium grandiflorum on the steep hillside overlooking Shirley Springs at the Leonard Springs Nature Park. I got this good close-up of a single plant, and of a bunch of them on the hillside. 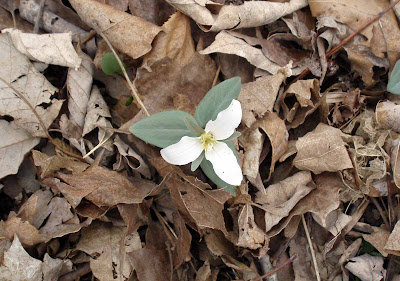 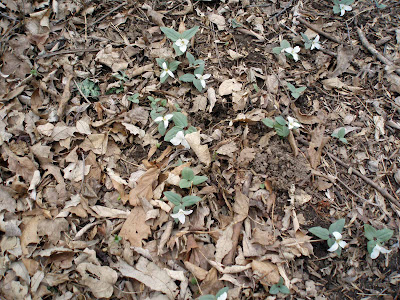